Hi there! Thanks for stopping by.
It gives me immense pleasure to welcome you to my website. And I would like to thank you for taking the time to walk through my website.
I have designed this to express myself to the world
I wish you a pleasant time in browsing my personal website. Looking forward to hearing your views and comments. 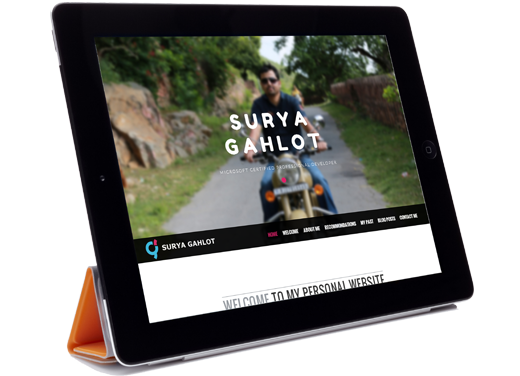 I am from Rajasthan, India.

Initially, I desired to become a cinematographer / photographer / a technician in electronics and went to school. One thing led to another and years went by. And lo, now I am a solutions architect without ever planning to become one!

I love to challenge the complex problems and prove them to be simple.

When I'm not coding, you'll find me browsing web.

I always look for new challenges and new people to meet.

Please feel free to contact me for any questions, suggestions, job offers, or to tell me your secrets, or just to say "hi"

You can reach me by mail : surya(at)suryagahlot.com